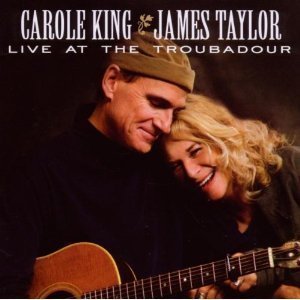 Two great tastes in music came together for the Troubadour Reunion tour, celebrating the 40th anniversary of their first time performing together at The Troubadour Club in Los Angeles originally in 1970. The reunion concert was held at the Troubadour itself in November of 2007. A CD/DVD album was produced from this event, that contains a subset of the tour playlist. The reunion tour was announced in November of 2009 and began the following March in Australia. Over 50 international dates were scheduled and the tour ends next week in Anaheim. USA TODAY considers it one of the top 5 concerts of this summer. It’s the top-selling ticket event in history, beating the Super Bowl, in terms of secondary ticket sales. I’ve been going to James Taylor concerts for over 30 years. I’ve seen three concerts so far this year, this was the best. Wednesday night it came to Denver’s Pepsi Center.

I got my tickets three seconds after they went on pre-sale and got seats in the second row off the floor, about 75 feet from the stage. This tour is a bit unique, trying to pattern the stage in an intimate setting, in the round in the center of the auditorium. As the stage rotated, I had great seats at least half the time, and there was a wide-screen TV on the backside of the stage. But we were so close that the view was better than what appeared on the circle of Jumbotron displays above the stage. Surrounding the stage were VIP stage seats with tables and chairs which funded the favorite charities of Taylor and King.

As the band took to the stage and with a guitar lead-in, photos from their youth appeared on the Jumbotron monitors, James Taylor and Carole King entered to a standing ovation and no other introduction as JT dressed in a suit played:

If this title sounds familiar, it is because it subsequently provided the introductory line in George Harrison’s “Something.” JT had originally wanted to title this song “I Feel Fine” after the lyric in his song “quite a long long time and I feel fine,” but The Beatles had already taken that title.

They switched as Carole King started up:

It was rendered very simply, with just bass accompaniment.

The rest of the backup joined, and JT introduced the band:

Hello Denver thanks for coming out, it wouldn’t be the same without you. We go through the motions but it’s not the same. We’ve got with us the original band from 1970-something…

Leland Sklar on Bass. He appeared out of the woods, don’t offer him food or have direct eye contact with him…

Russ Kunkel on Drums. He can hit things and make music. What he did on “Fire and Rain” with brushes in studio…

Danny Kortchmar on Electric Guitar. I’ve known him since he was knee high to turnip green, introduced me to Carole, and was in the band Flying Machine with me.

We’re going to do now one of Danny’s songs:

We played everything we had and this was probably in it…

This was one of his earliest hits and it appeared on his debut eponymous album in 1968 which he recorded for Apple Records, the record label of The Beatles. He had written it in London as he was homesick. The lyric “holy host of others standing around me” is a reference to The Beatles who were recording The White Album at the same time and studio, and accompaniment by Paul McCartney and George Harrison on the track.

This is one of his most affecting and heart-tugging songs and has become the unofficial song of both the State and the University of North Carolina at Chapel Hill. When I saw him perform this song at Red Rocks accompanied by visuals, I wanted to go to Carolina in my mind.

As JT performed this Wednesday night, he had great backing singers, who after they finished this song all left the stage, all but one.

Carole then introduced keyboardist Robbie Kondor, as she took up her guitar for…

JT took up the lead with

As is his habit in live concerts, he goes funk and Carole brought the crowd to their feet to clap. “You can feel it” hands go up.

Carole then continued with

I co-wrote this with Ms. Toni Stern

JT picked it up with one of my favorites, a later hit that really moves:

I’ve been a fan of James Taylor since I met him in 1970. I wrote this following song by myself that sounded like one he was writing. Listen to them both, it’s spooky

that began with “Whispering wind.”

James then sang a hauntingly similar

with lyrics of “long ago sailing ships and Sunday afternoons”

JT then told us:

The next two are hymns for agnostics, spiritual, yet non-assigned. They help you get up and put one foot in front of the other.

Carole left the keyboard to join the choir of three backing singers for the second hymn:

When it went into acapella mode, it was like a revival, the crowd clapped, but when

Arnold McCuller— who has been with JT for 30 years — then went gospel, the crowd came unglued. After the standing ovation, JT said:

That was good… too good.

At least half the audience sang along as she riffed with the lead guitarist. She brought down the house and then continued

Were going to take a 15 min break. Well be back and hope you will too.

During the interval, the Jumbotrons showed “Intermission” reels from the Drive-in movies of the ’60s, including the famous dancing hot dog from the movie Grease.

The band and the leads returned from the break. JT was in his usual relaxed jeans, short sleeves, and now a riding cap. He did a long musical intro to

Another song about North Carolina, redolent with smells and memories so thick you have to brush them away like flies.

This song was accompanied by both fiddle and accordion. This was nostalgia on steroids.

As JT and Carol got side by side, he said

Such beautiful harmonies between the two of them.

We started putting this tour together back in November. First set list was 6 hrs long (the crowd cheers approval and encouragement.) It had to be shortened, and it was an emotionally wrenching experience removing song. Taking them out was like dropping your kids off at camp.

This was requested by Denver.

And it was. He did a web poll on his website before the concert came to Denver

Gonna do a cowboy lullaby. When I wrote this I’d been abroad for a year. That never sounds right. I’d been traveling overseaw.

He’d been recording in England and was driving down to North Carolina as he describes his brother And his wife having a kid while he was away.

In a moment of relaxed judgment they named him after me. It’s a cowboy lullaby that might have been sung by Roy Rogers or Gene Autry. Lights out in the bunk house. Go to sleep ya little buckaroo.

This is my favorite song by JT, telling of the past with the cowboys, the present of a drive from Western Massachusetts, and the visionary picture of the highway, the sea, and the sky. Textures and colors of deep greens and blues. When Carole added the harmonies, it pulled at my heart. When JT performed this song a few years ago at Coors Amphitheater, he mentioned that the grandmother of Sweet Baby James was in the audience. Could this have in fact been both the grandmother of his nephew as well as his own mother Gertrude Taylor?

Next came a very slow entrance to a song that is not on the Troubadour Reunion album, but welcomed famously

For this performance, the wailing sax was replaced by the electric guitar. Though it was good, the saxophonist was missed. Even Lisa Simpson would have done.

Carole continued by telling us

Back in 1960 I was a struggling song writer. I had a hit with (the girls group) The Shirelles. It was recorded 10 years later with James Taylor.

When JT sang his long, low, soulful harmony, it was heart-melting, bringing applause. They hugged after the song and the room came to their feet.

This was a huge crowd pleaser by JT.

Carole did some nice instrumental jamming in the middle that brought a well-deserved ovation.

This introspective ballad once hit #3 on the charts. A mournful song about depression, his time in mental institutions, and a friend’s suicide tell about the crash of his early band The Flying Machine. This hit song for JT had Russ Kunkel doing his innovative brushes on drum. He took a bow to another standing ovation.

Carole then continued with

Most of the ladies came to their feet, as the Jumbotron showed videos of ladies in old dancing movies. This too got an ovation.

And then she wrote…

JT often explains in his own concerts that it was her great generosity to let him release this song she wrote before she herself did on her own Tapestry album. Both won Grammy Awards in 1971 for the song.

On the first chorus, she sang harmony. On the second verse, she led and JT did harmony.

For the last verse, Carole sang

Here we are in Denver

For a night to remember

We’re so glad we came

Hope you feel the same

There was, of course, a standing ovation as they left the stage.

Not unexpectedly, there was an encore. JT introduced it with

And then she wrote…

As he often does in his own concerts, when he sings “Up on my roof” he begins to hop onstage.

But Carole’s style is different, almost in a minor key. They switch between arrangements.

And the stars at night put on a show for free

As the Jumbotron shows a starfield. But JT resumes his style with

I laughed out loud it was so good! This song was worth the ticket price alone. I remember when JT did this on the Sesame Street TV show. This song Carole originally wrote in 1962 for The Drifters. Catch the line

I climb way up to the top of the stairs

And all my cares just drift right into space

Lest the audience think this was the end, They each raised a single finger suggesting just one more.

They closed with this lullaby, as Carole sang the most wonderful harmonies. Though once harmonized by his first wife Carly Simon, Carole King was every bit as good, looking into his eyes with admiration and respect and at the end laid her head on his shoulder.

These two iconic singer-songwriters, whose powers remain undiminished by the years, each has been strumming our heartstrings for decades.

They closed with a kiss and embrace.

It is rare to see performers with such sincere affection for each other who seemed to enjoy being with me as much as I enjoyed being with them.

Carole King’s piano added depth to James Taylor’s vocals, and his guitar contributed percussive accents to her lyrics. His trademark plucking style, rhythmic strumming, and fretboard hammering have inspired so many budding guitarists. Her deep lyrics and his soaring vocals. You’ve heard it said that the movie is not as good as the book? The Troubadour Reunion Tour album was not as good as the concert. Many artists of this age just can’t do it anymore. These two can, with a polished and delicious concert.

How Sweet It Is.

UPDATE: YouTube has an interview with James Taylor and Carole King from Denver here.

History of The Who’s Tommy: 53 Years Ago
Posted in Concert, Music, Pop Culture and tagged Carole King, James Taylor
← History of the iPad: When is a Tablet not a Tablet?VMworld 2010: Day 1 – Virtual Roads. Actual Clouds →