October, the tenth month of the year in both the older Julian and the more recent Gregorian calendar was the 8th month (Latin octo) in the old Roman calendar, but with the addition of January and February got bumped to #10.

This month is significant in that, according to the modern Gregorian calendar, it is the first full month that enjoys Pumpkin Spice Latte, initially promoted by St. Starbucks. But it has not always been so, and therein lies the saga.

This concoction of caffeinated seasoned squash with super-heated supersaturated calcium lactose was originally socialized during the ancient part of this millennium, around 2003 when it was introduced as a seasonal beverage. Its formulation has not always been the same, however. Starting in 2015 Starbucks added real pumpkin ingredients, a novel concept, and some artificial flavors and colors were eliminated. The first day of the year that this popular drink goes on sale has varied from year to year. This is related to, but dissimilar to what is called Christmas Creep. Christmas shopping and decorations — back in more civilized times — used to go up the day after Thanksgiving; then it moved to immediately after Halloween, now you can find Christmas merchandise in Costco in September. Pumpkin Spice Latte (PSL), according to climate scientists, appears instead to suffer from PSL Drift.

Generally, it appears after Labor Day in September, but sometimes it does not show up on the menu and must be requested by name. This year, it went on sale at various times across the country on August 25 (technically Summer, if you think about it), sometimes there is early access, some five days earlier for select customers, based on if they follow the magic account on Twitter (more later). In 2015 it had drifted as early as August 25, with general availability being September 2. 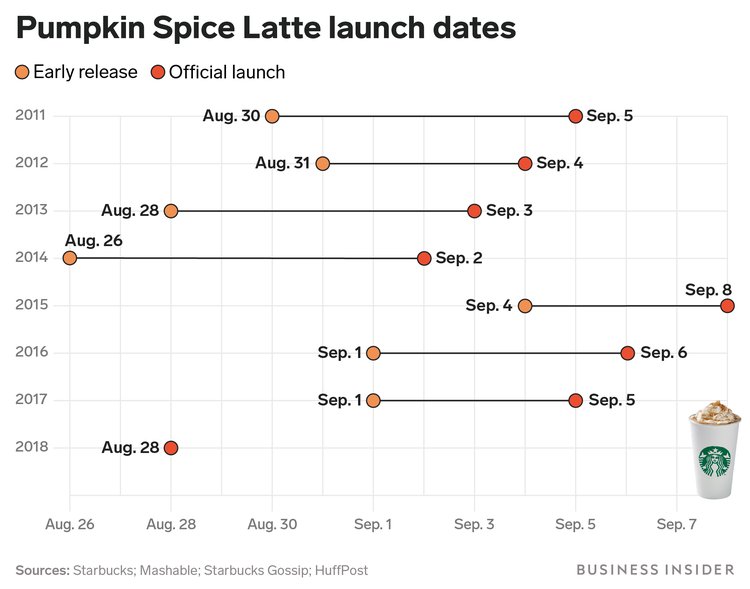 PSL Drift is wreaking havoc with the beginning and end of Seasons. Drinks like Eggnog Latte and Peppermint Mocha were relatively well behaved, confining themselves to Winter. PSL, on the other hand, is a “crossover” beverage covering both Winter and Fall… “for a limited time only.” That’s two seasons! And with this sneak into Summer… It’s becoming like DST (Daylight Saving Time) which now comprises most of the year.

PSL’s introduction each year has become the virtual harbinger of Fall, regardless of the astronomical and scientific importance of Autumnal Equinox in September or the changing of the Aspen leaves. And when we say Pumpkin Spice Latte, we do not of course literally mean milk, the translation of the Italian word latte; it also is available with Almondmilk. Now you can be kind to a cow.

But wait, Dunkin’ Donuts last year announced that its fall menu launched on August 21 with Pumpkin with the possibility of 8 early cities who are changing their names from Dunkin’ to Pumpkin’.

This year they announced their PSL for availability on August 19, along with Pumpkin Spiced Latte Ale. A donut shop that also sells coffee is marketing beer?

And that’s not all: their partnership with Harpoon Breweries include additional donut-infused beers like Boston Kreme Stout, Jelly Donut IPA, and Coffee Porter.

This serial success has led Dunkin’ to team up with Post Cereals to promote Dunkin’ Carmel Macchiato and Mocha Latte. With over 424 million sold (shades of McDonald’s, which itself recently brought back its McCafe Pumpkin Spice Latte), an annual run-rate of 20 million cups, and sales of over $1.5B, PSL has become a cult — like buying Apple products — and there is even an official Twitter account with 96 thousand followers: @TheRealPSL. It has its own hashtag: #PSL. And let’s face it, when you’ve got your own hashtag, you’ve essentially made it.

The Pumpkin Spice Industrial Complex is now a $600 million market. Who knows with Seasonal Beverage Fatigue, next they’ll be putting this flavoring in pies.