ITALY TOUR: ROME IN A DAY (OR TWO)

A friend of mine is going on an Italy cruise and asked me to suggest some places for the cities where he has a day or two. I was going to put together a spreadsheet, but I didn’t have enough time, so I wrote this Italy Tour travel guide instead.

There is a famous Italian saying:

While “the eternal city,” imperium sine fine (“empire without end” — Virgil’s Aeneid) is that deep historically, there is still a lot you can see in a day (or two.) History is everywhere.

I’ll rank these as:

“Everybody comes to the Vatican.”

Napoleon was given a private tour and returned years later to steal some of its treasures.

Hitler repeatedly called the Pope to get invited for a visit, but the pontiff was always away from the phone.

You’ll need to get a timed tour, or else the lines are prohibitive: budget about 4 hours to see the world-class Vatican Museum and St. Peter’s Basilica. In between the two, you’ll walk through the Sistine Chapel. The museum was kept private for centuries and housed unimaginable treasures of art and sculpture.

Mussolini, during WWII, signed a treaty with the Papal State:

“I won’t invade the Vatican if you open your museum to the public.”

St Peter’s is the largest cathedral in the world, with bronze labels inlaid on the floor to show you the relative size of other large cathedrals. The next largest is in Washington D.C. at Catholic University. The artwork, the marble of St. Peter’s… is breathtaking.

Special Note: Keep your eye out for porphyry stone. St. Peter’s is full of it, as is the Vatican Museum, Forum, Pantheon, and Scala Sancta (below.) It is an igneous rock similar to granite. Unlike common granites, porphyry has large, light-colored crystals of quartz or feldspar floating in a red or purple fine-grained matrix of smaller crystals.

The word “porphyry” comes from the Latin word for purple, which was the color of nobility to the Romans. Porphyry was Imperial Rome’s most prestigious stone for columns, vases, alters, busts, and sarcophagi.  Imperial porphyry in ancient times had only one source, in one of the most inhospitable places on earth, the eastern Egyptian desert, where it was discovered in A.D. 18.

There are a number of “add-on” tours you can take at the Vatican that involves more money and time. I’ve done only the first one: 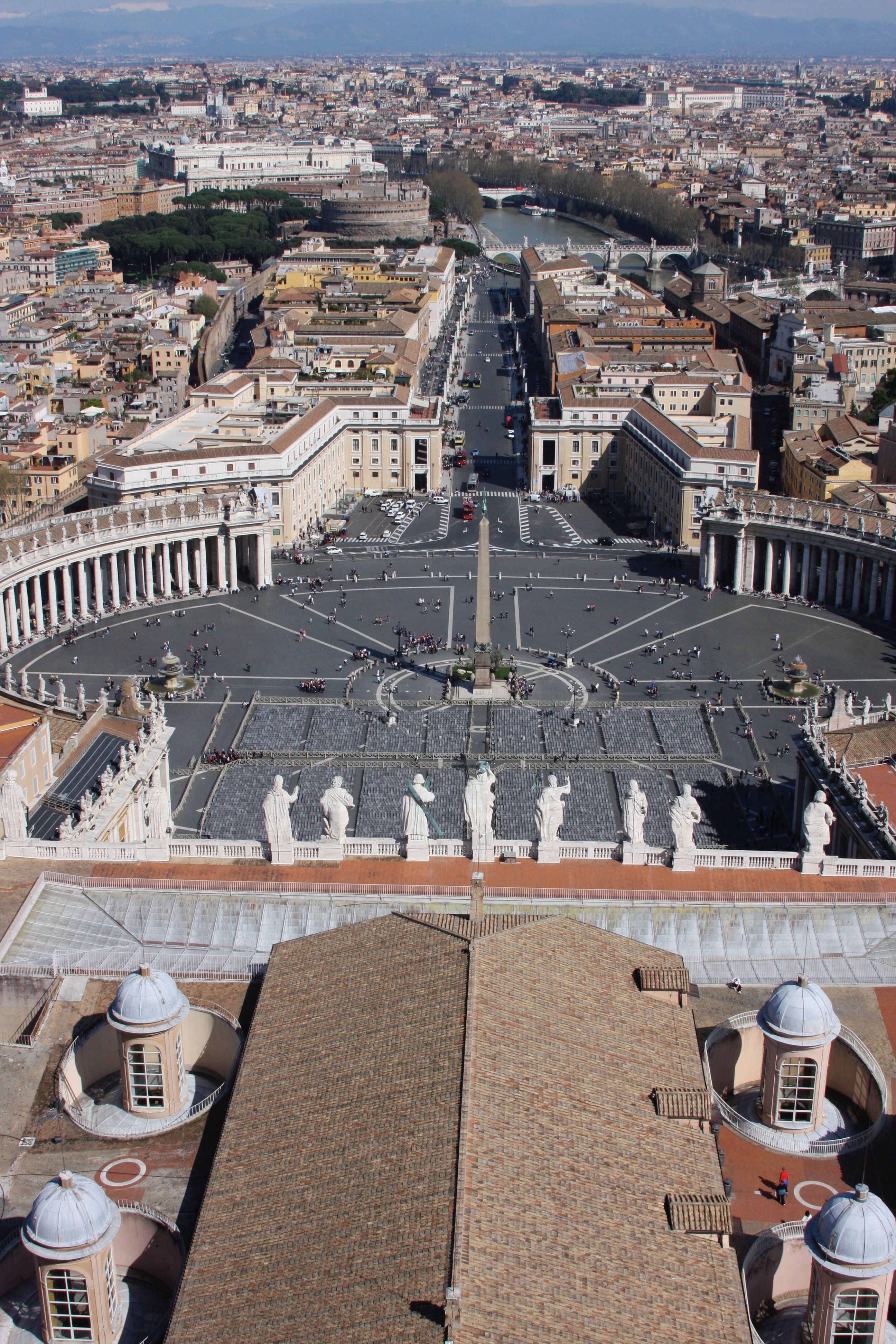 St Peter’s Square from the dome of St. Peter’s Basilica 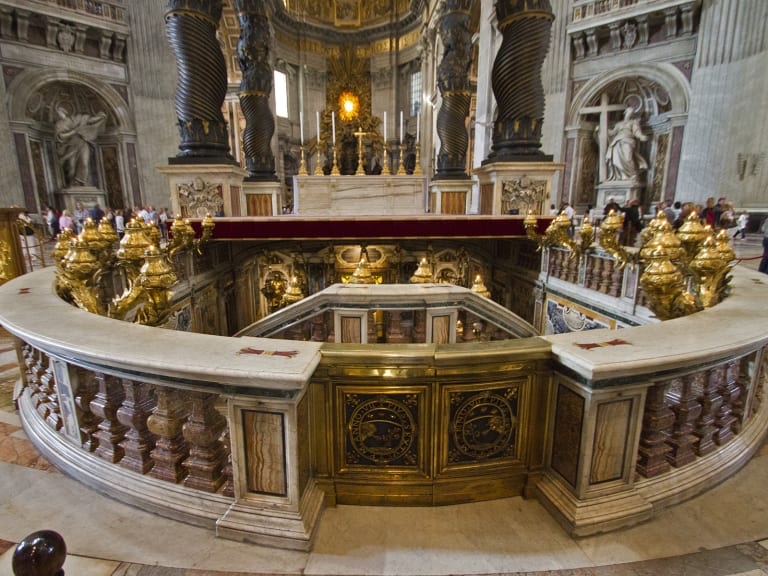 Entrance to the Crypt, under the Altar

If you liked Gladiator you’ll love these. I’ve written about this area in several of my articles. Check days/times on Forum tours; it used to be free, but it’s now a paid entrance. It goes back to Roman Republican times. You’ll see the ruins of Julius Caesar’s shrine beneath the Palatine Hill.

N.B. We get the word palace from the Palantine Hill. It was the location of the palatial residences of many of the emperors. The capitol was located on the hill next to it, on the west side of the Forum: Capitoline Hill. It was the religious nucleus of Rome. 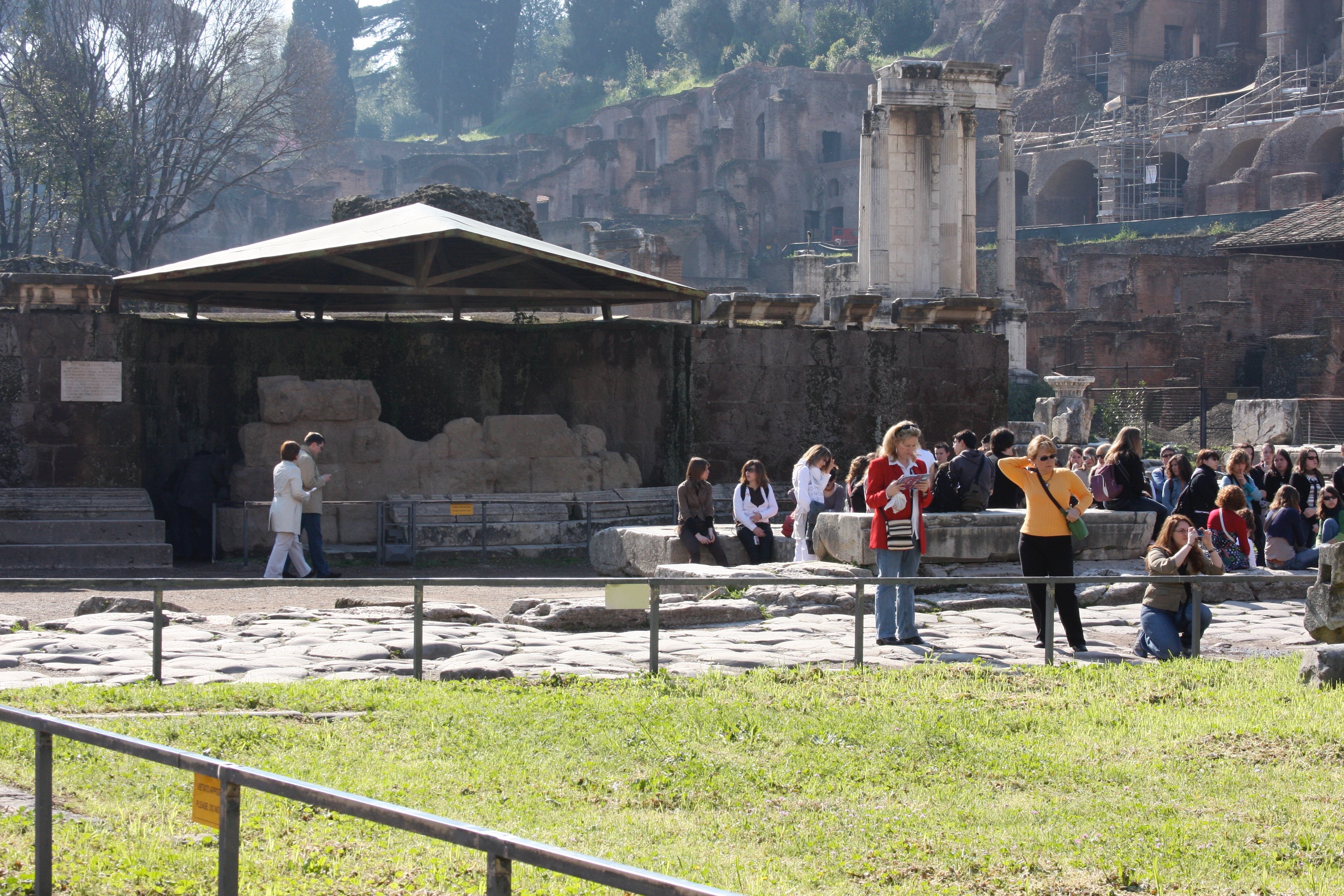 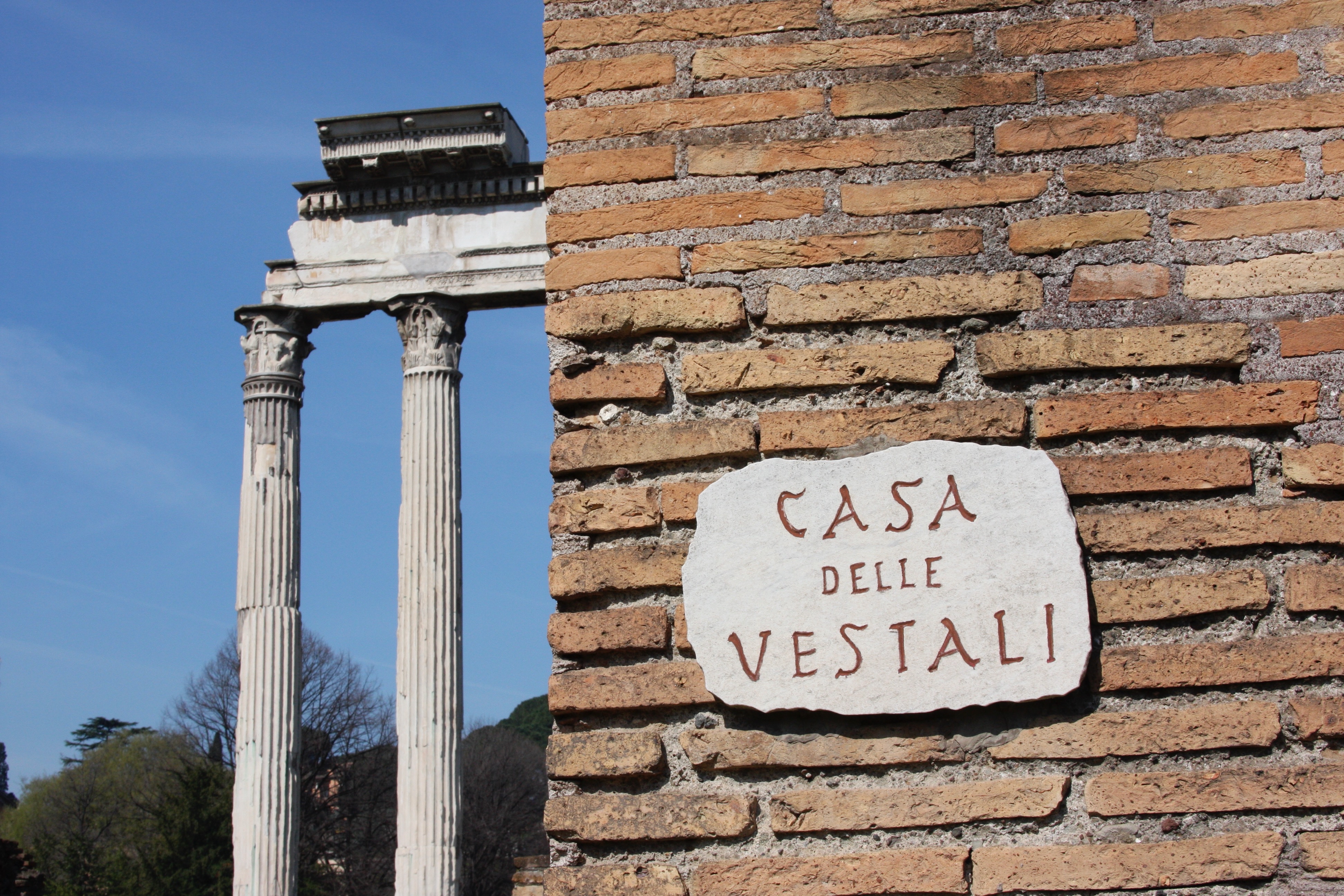 Temple of the Vestal Virgins, Forum

This is the Rostra from which Marc Antony gave his “Friends, Romans, countrymen” speech (according to Shakespeare). 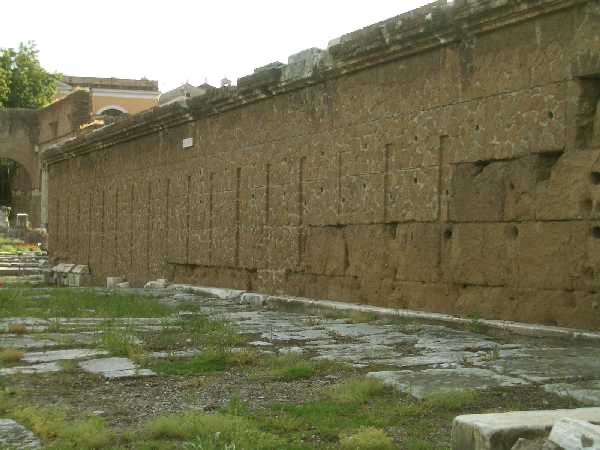 Rostra, in the Forum

On the edge of the Forum is the Mamertine Prison. It is essentially a honeycomb of underground cells, but tradition has it that both St Peter and St Paul were imprisoned here for a time. 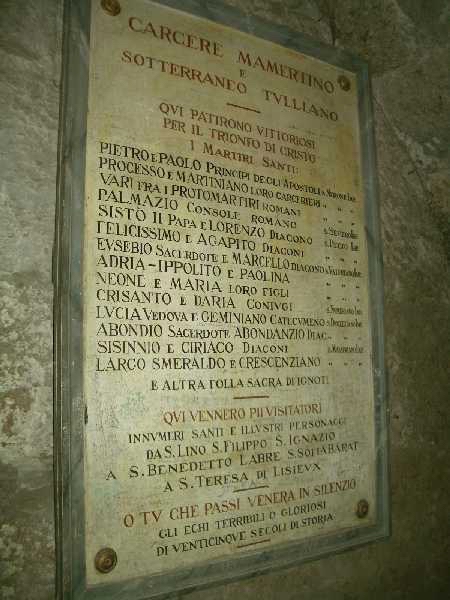 Interior wall of Mamertine Prison, off the Forum 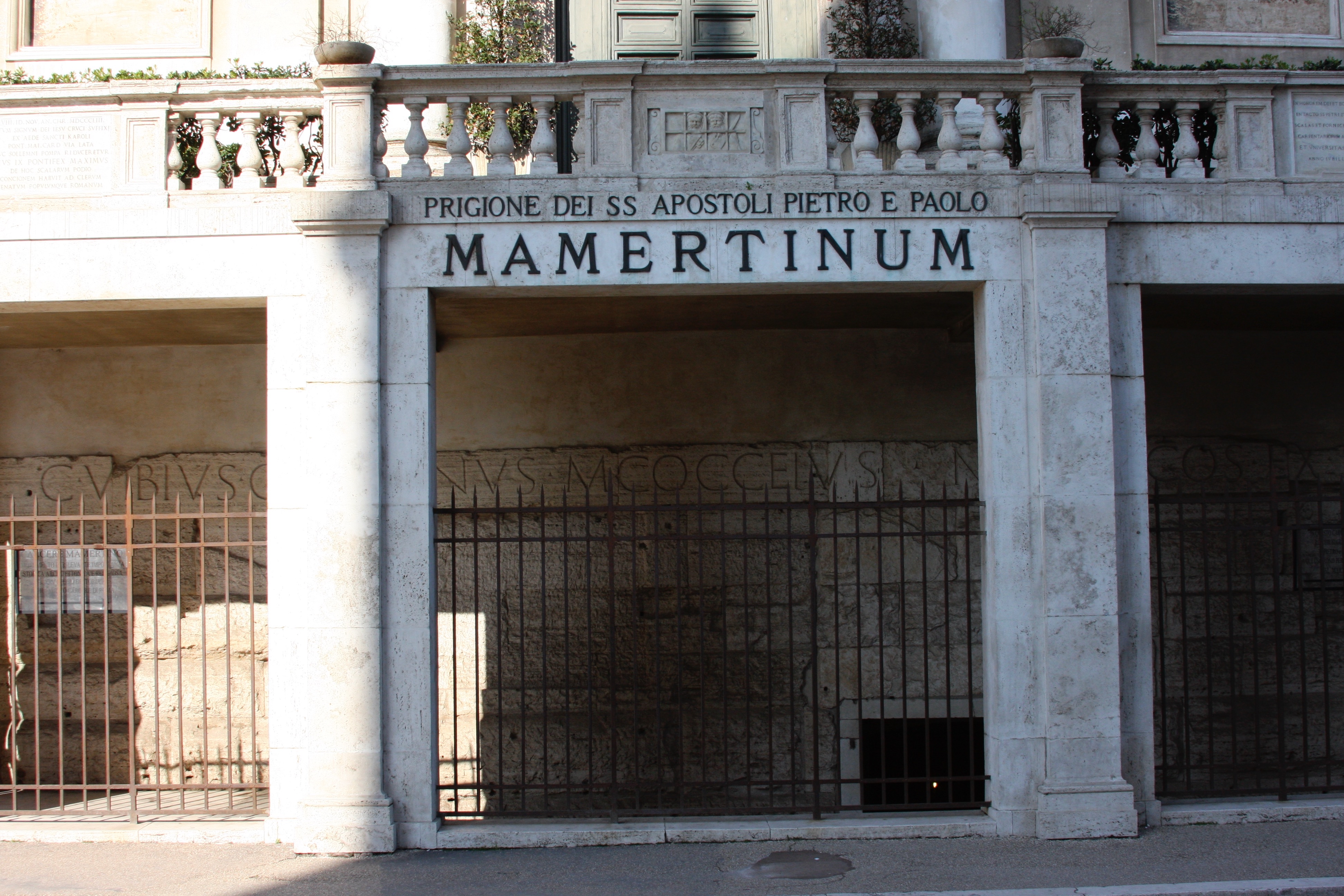 Mamertine exterior, off the Forum

The Colosseum is on the far east side of the Forum (you can’t miss it) and is worth the time and money to take the tour. I’ve written more about the history of the Colosseum here. It is not from the Republican period, but the Imperial period (think: Star Wars: Episode 4).

It was built near the end of the 1st century to honor the 2nd dynasty, the Flavian Dynasty, and was originally called the Flavian Amphitheatre. [This is why no Christians were martyred there during the reign of the last 1st Dynasty ruler Nero… but they certainly were thereafter.]

You’ll hear about the Imperial, Medieval, and Renaissance periods on the tour there. There was even a church there at one time. And Paul McCartney performed there (see his performing platform?) 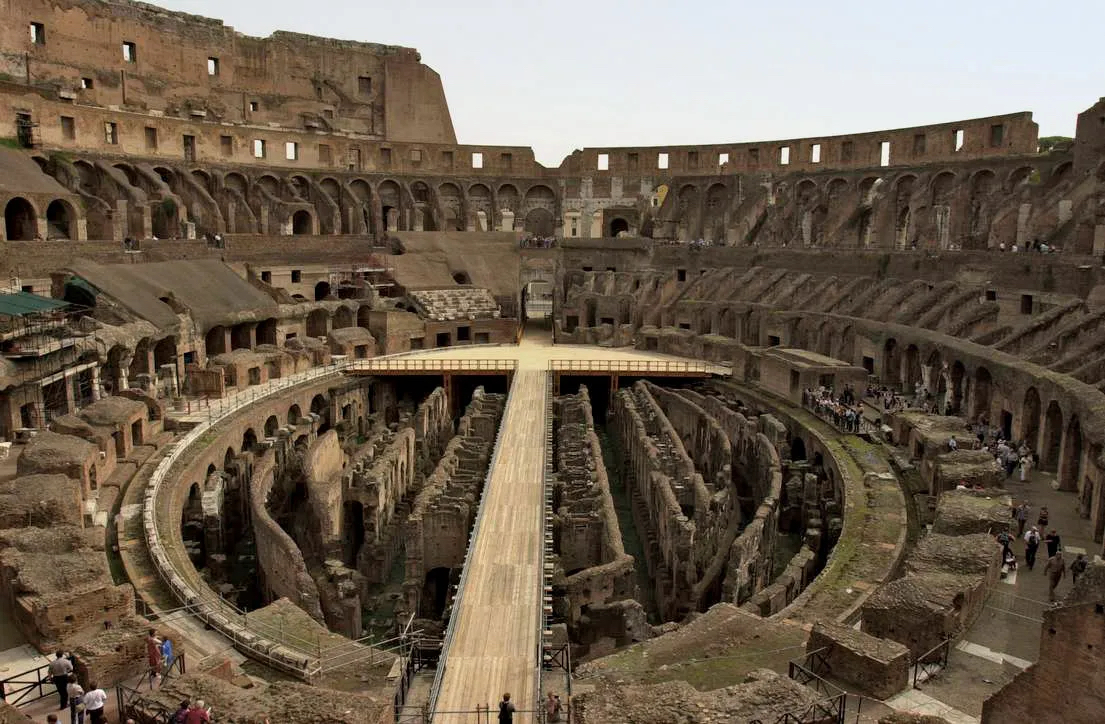 Paul McCartney’s stage in the Colosseum, from back in 2003

Special Note: as you pass from the Forum to the Colosseum, you’ll walk through the Arch of Titus. 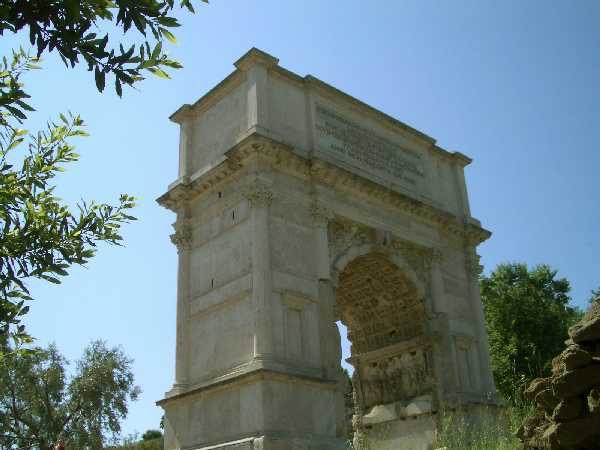 Inside the arch, it depicts the Jewish captives of Jerusalem (following its fall. in 70 A.D.) with their candelabra, being led as part of his triumph in Rome. 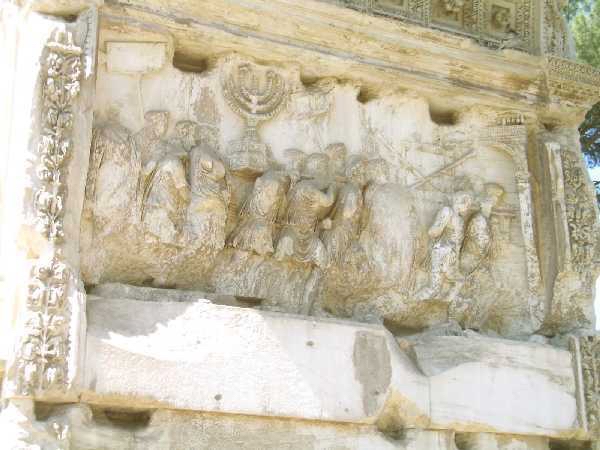 Beneath the Arch of Titus, Forum

Near the Colosseum, you’ll also see the Arch of Constantine. He was the first “Christian” Emperor, but ironically with no references to Christ on the arch, but a few to the Sun god. 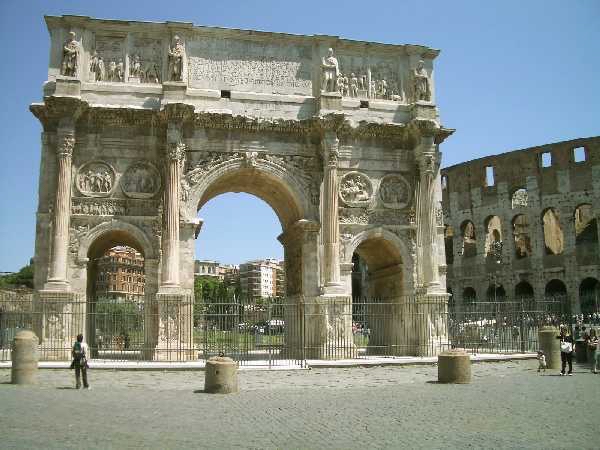 Arch of Constantine, next to Colosseum

Rome: The Pantheon: B

You may not be able to include this in a single day, but if you have more time, it’s worth seeing. The movie about Dan Brown’s Angels and Demons (worth reading/watching before you go for the city geography, but not for the history) erroneously calls this “the oldest church in Rome.” It isn’t, but it is the church in the oldest continuously used building in Rome.

The church, since the early 7th century, is called Basilica di Santa Maria ad Martyres but everyone calls it the Pantheon, after the worship of the dozen Greco-Roman gods there 2,000 years ago. It’s near the modern Senate building. I’ve been here over half a dozen times; it’s gobsmacking. 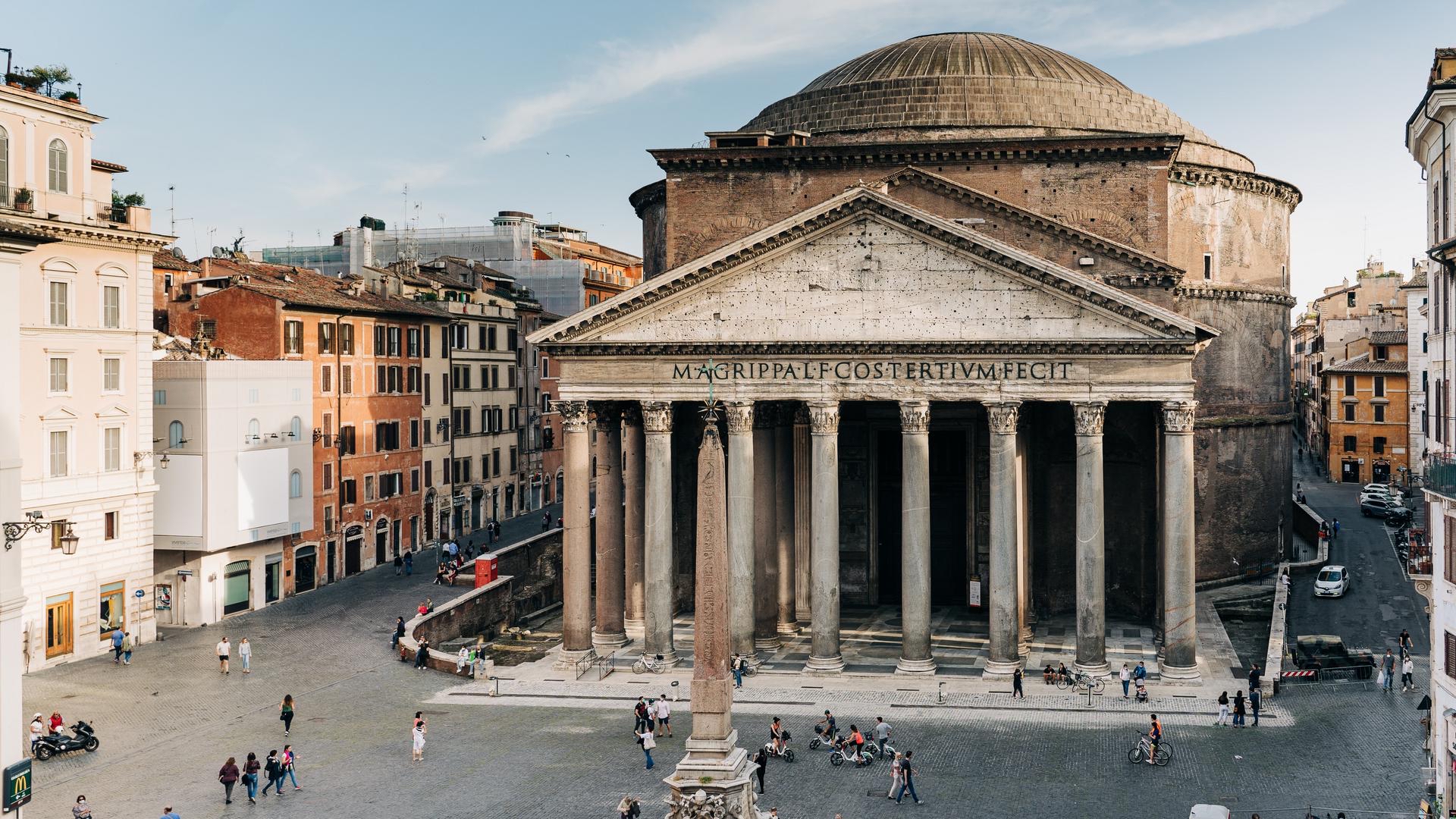 The rotunda is under a coffered concrete dome, with an oculus at the top to let the sacrificial smoke/incense out. And yes, when it rains, some rain falls on the floor. The dome is one meter different in diameter than that of St Peter’s. 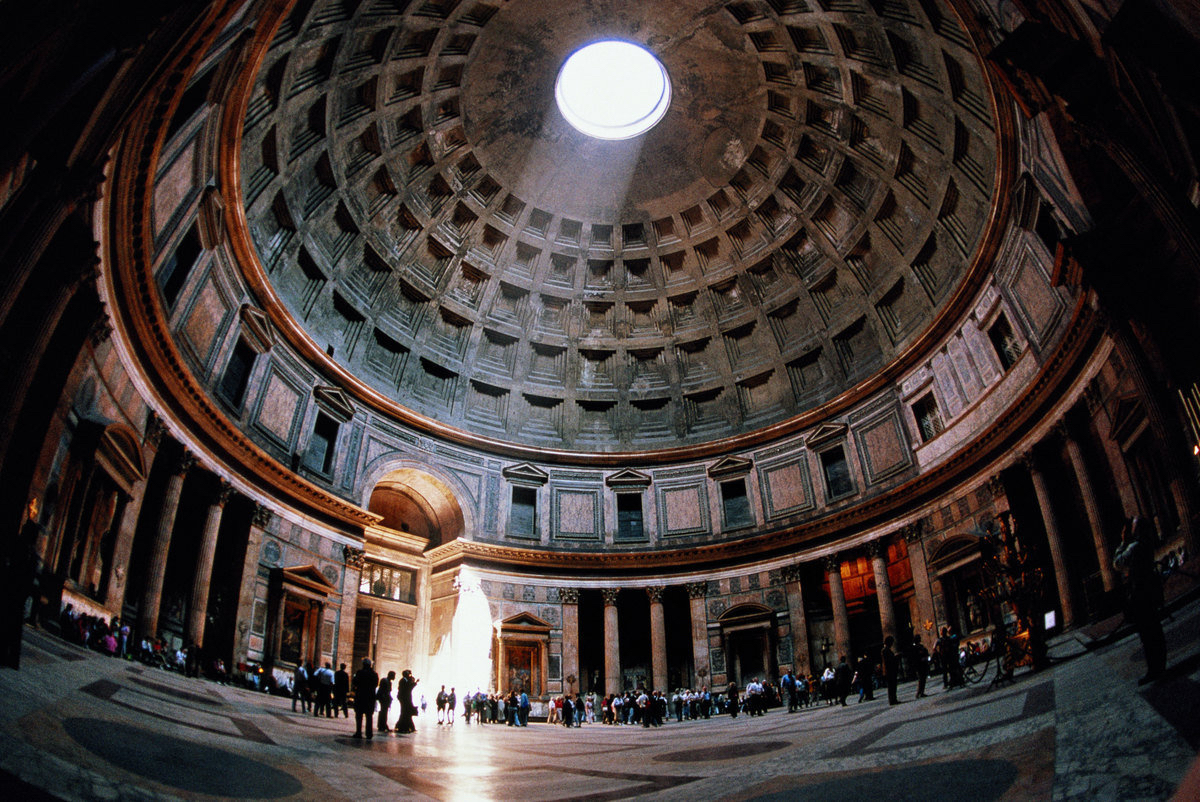 There is a nice square in front of the Pantheon; it’s worth catching your breath there. There are coffee shops and gelateria, starring Nutella. Try the sorbetto limone (lemon sorbet). 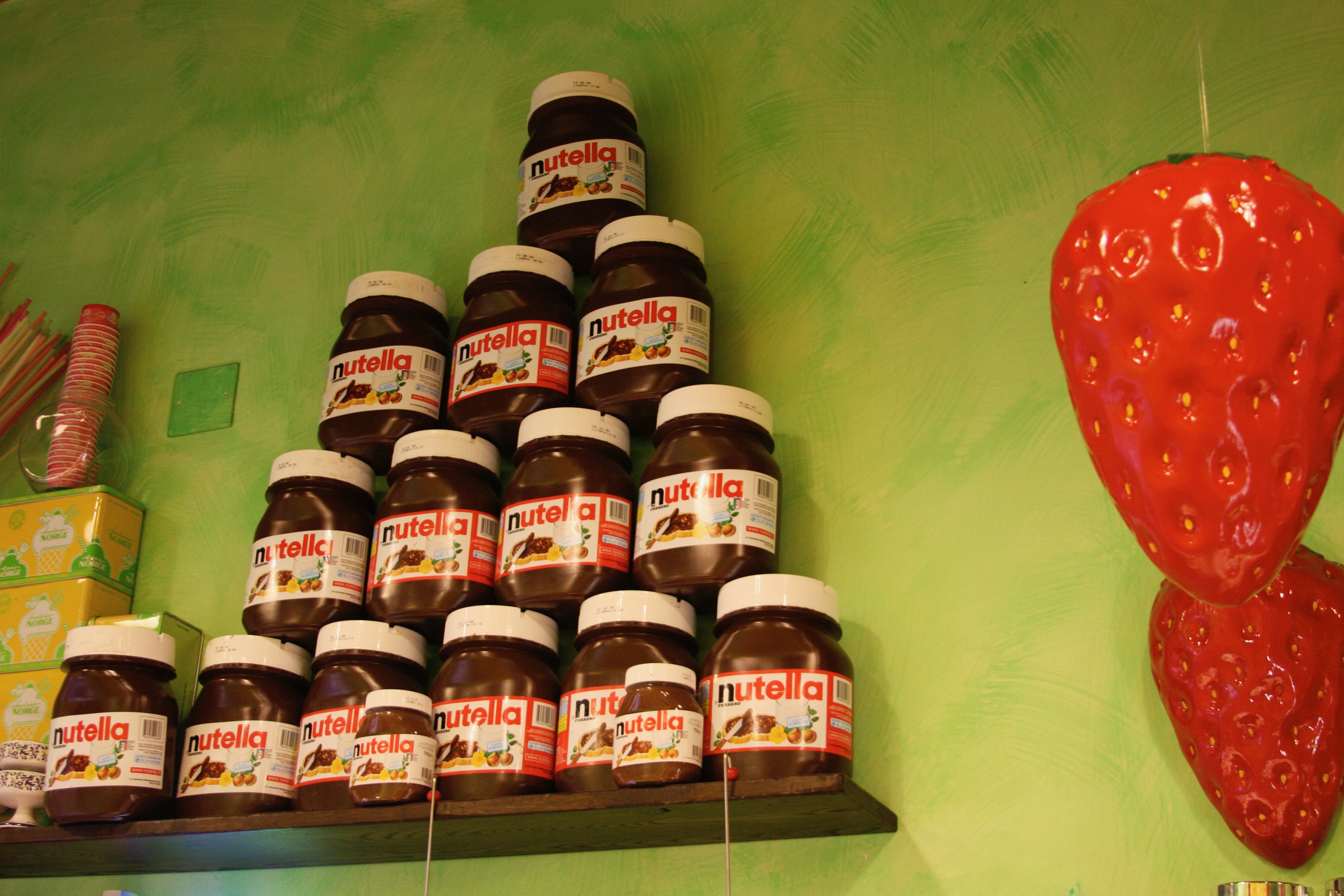 The Papal Archbasilica Cathedral of the Most Holy Savior and of Saints John the Baptist and John the Evangelist in the Lateran is of great historical importance, as it is THE cathedral of Rome.

St. Peter’s, for all its glory, is not in Rome; it’s in the city-state of the Vatican, having become independent from Italy with the Lateran Treaty of 1929. 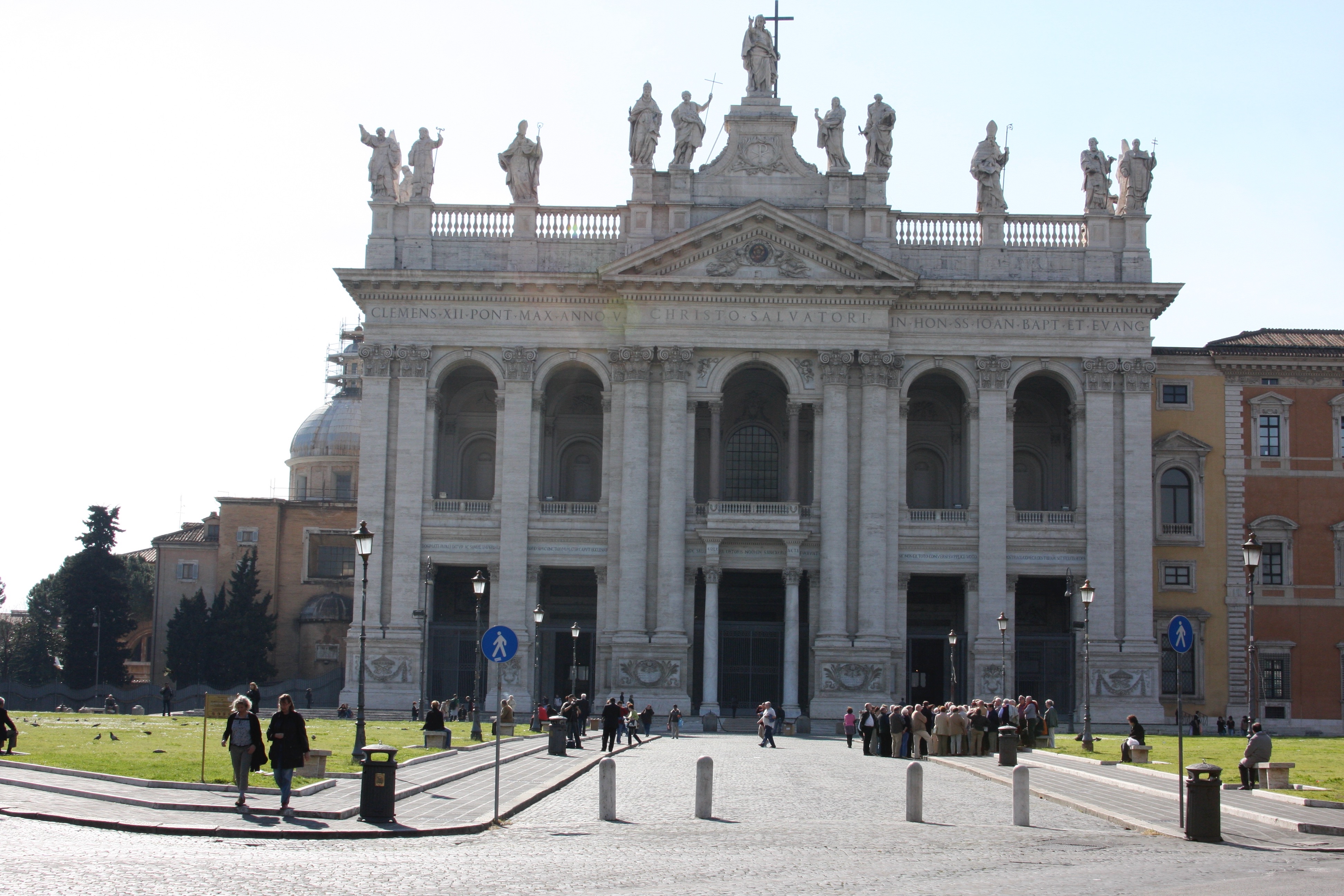 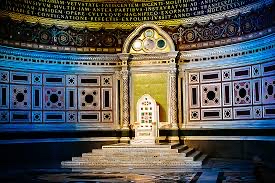 St John’s is the oldest and highest ranking of the four major papal basilicas as well as one of the Seven Pilgrim Churches of Rome, and is the oldest public church in Rome, dating from 324 AD.

Emperor Septimius Severus built a fort there (you can see his impressive arch back at the Forum) — and gave his name to Hogwarts’s Professor Snape. 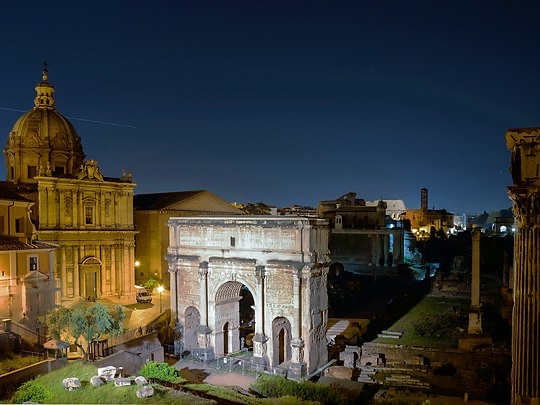 Constantine used the fort as part of his Battle of the Milvain Bridge where he was victorious in battle over Maxentius (following his vision/dream “In this sign [of Christ] conquer.”)

Parenthetically, the origin of the name came from the patrician Lateran family who, in the 1st century, was accused of conspiracy against Nero, and their lands and wealth were confiscated by the State. The Lateran Palace became Constantine’s when he married Maxentius’ sister. He eventually gave it to the Bishop of Rome in the early 3rd century. The 313 A.D., a synod against Donatism was held there.

The Holy Door (Porta Santa) of the church is a pair of 50’ bronze doors (if I recall correctly, the largest in the world) that have a storied past.

These bronze doors were of the Curia Julia (Senate House), originally in the Forum. They were first started by Sulla in 80 B.C. They were rebuilt by Julius Caesar in 44 B.C. They were finished by Augustus. These doors probably date back to Emperor Diocletian when he restored the Curia after a fire in A.D. 283 and were moved here at the request of Pope Alexander VII in the mid-1600s. They are opened only once every 50 years for Jubilee by the Pope for pilgrimages to Rome. For those who cross the threshold, they get a plenary indulgence! 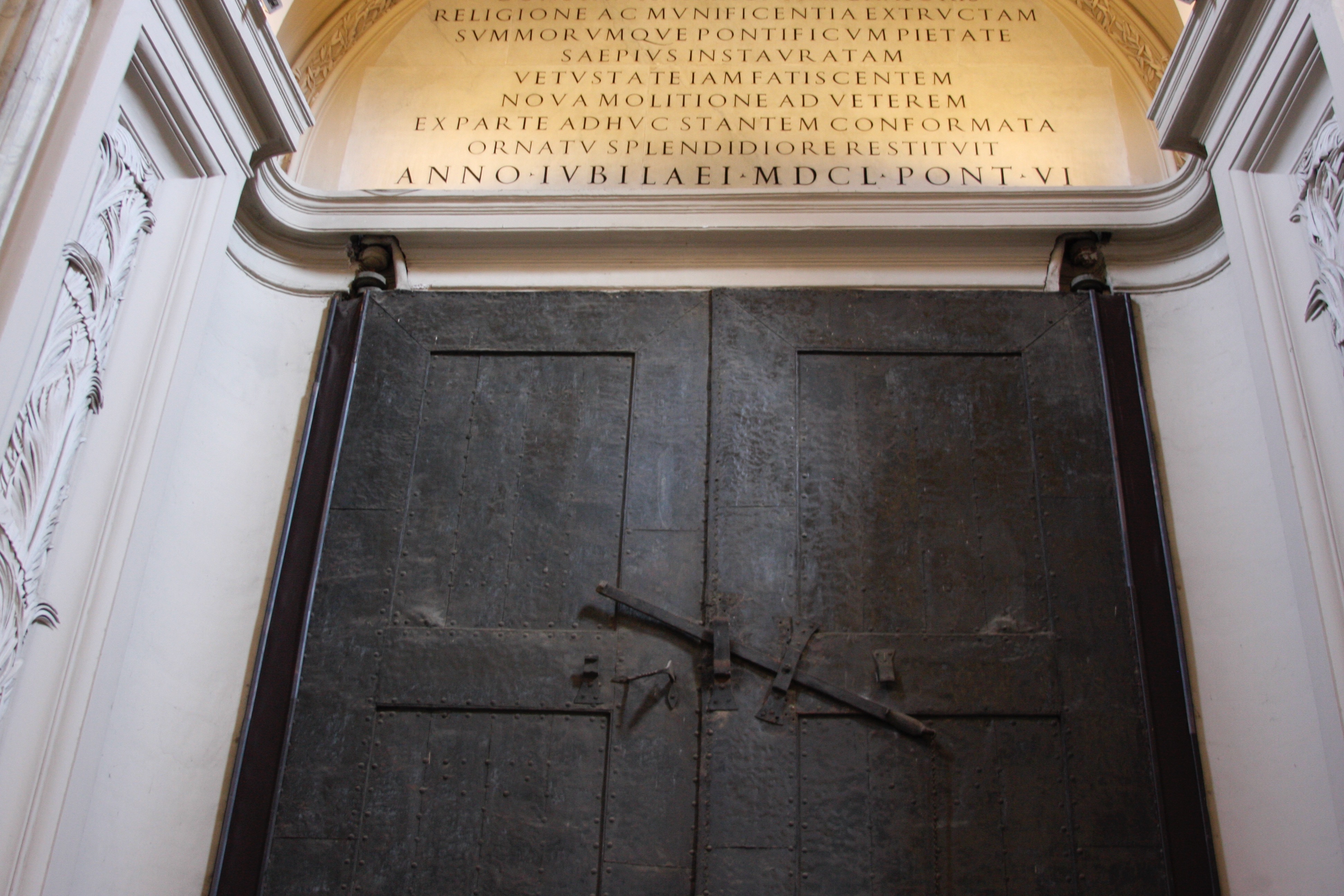 There are statues of each of the Apostles, fabulous artwork, and a nice garden behind the church. It is less crowded than the Vatican and absolutely beautiful.

Saint Simon the Zealot, by Francesco Moratti, south wall of  St. John’s Lateran. One tradition says he was martyred by being sawn in half. 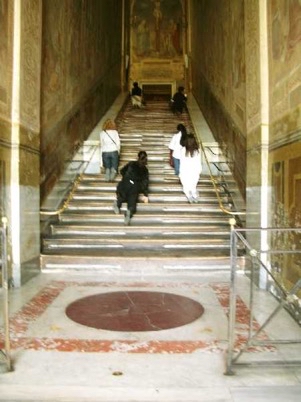 Scala Sancta, across from St. John’s

Most importantly, across the street from St. John’s are the Scala Sancta. While in Rome in 1510, the 27-year-old Martin Luther climbed the famous Sacred Stairs, which were said to have been the very marble stairs of Pontius Pilate’s pretorium in Jerusalem where Jesus was condemned to be crucified.

It was widely believed that St. Helena, the mother of Emperor Constantine, had brought this relic back from the Holy Land. If a pilgrim to Rome climbed the steps on their knees and said a prayer on each of the 28 steps, it was believed that one of their relatives would have their time in Purgatory cut short.

But the excited monk, upon reaching the top of the stairs, wondered to himself

“Who knows if this is really true?”

This is the largest square in Rome, built on the old Stadium of Domitian. It’s the old Circus Agonalis, the “arena of games.” Live concerts are held now on occasion, art is for sale, and fabulous baroque fountains like the Fountain of the Four Rivers, are a nice respite from the ancient monuments. Charming. 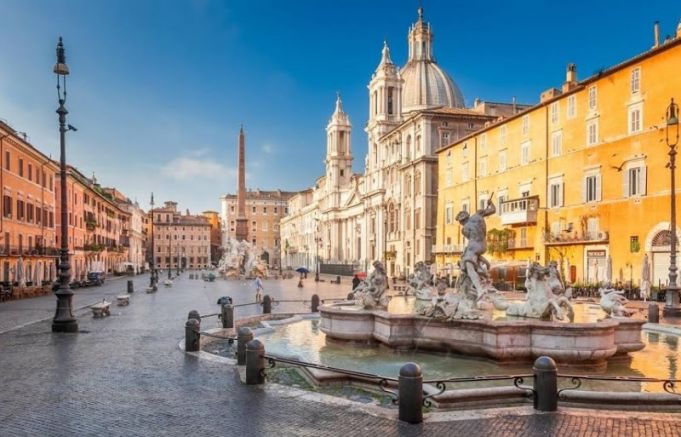 Do you remember the song “Three Coins in a Fountain”? This is the place, featured in the 1954 movie by the same name. 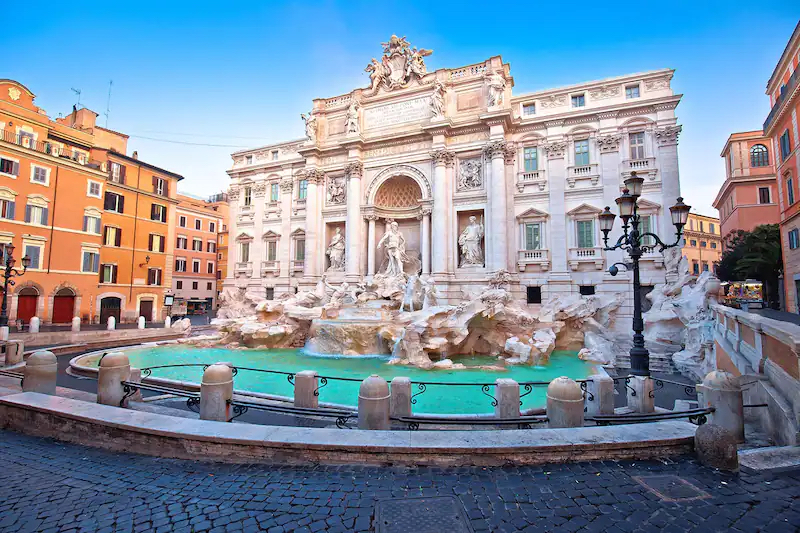 You sit on the edge facing away from the fountain and throw a coin over your left shoulder with your right hand. 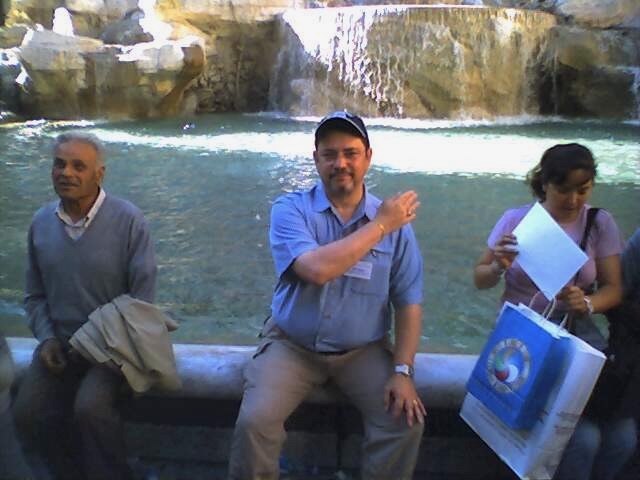 American visitor 18 years ago tossing a coin in Trevi Fountain hoping to return to Rome. He did.

“Everyone goes there,” which means it’s usually crowded with young, healthy tourists. At the bottom by the Piazza di Spagna is a tea shop started by two British ladies. At the top is a church with some interesting artwork on the walls. The Spanish Embassy is at the top, hence the name. 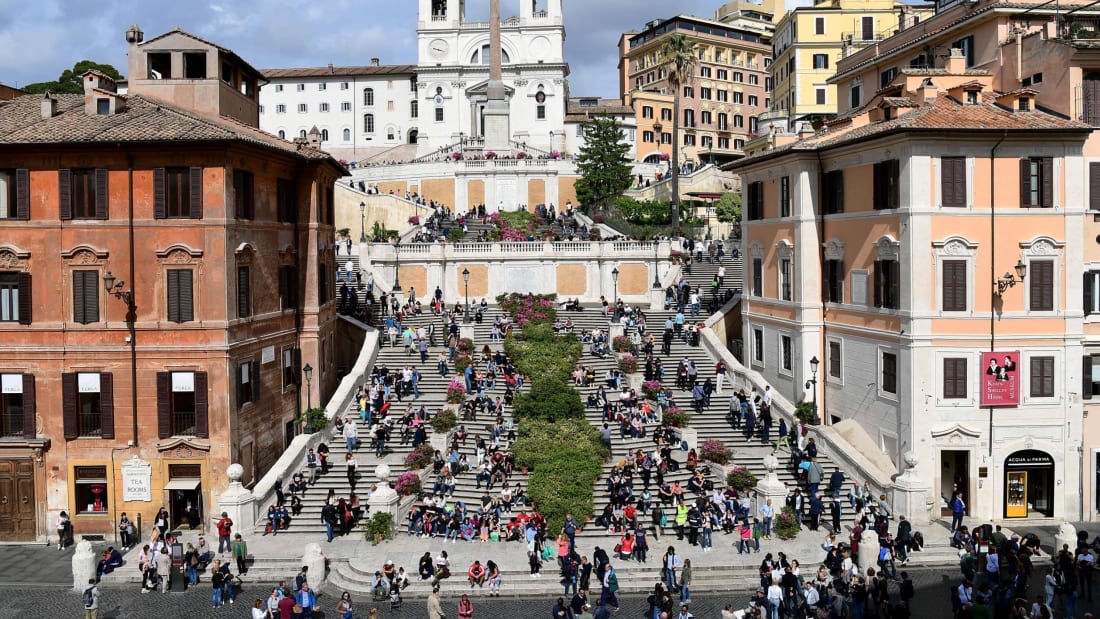 This is “the cafe lifestyle” on steroids. Sit and have a cappuccino or a glass of wine in this “field of flowers.” There is an open-air flower and vegetable market. Kids run around. Lots of little shops around it. It’s lovely. 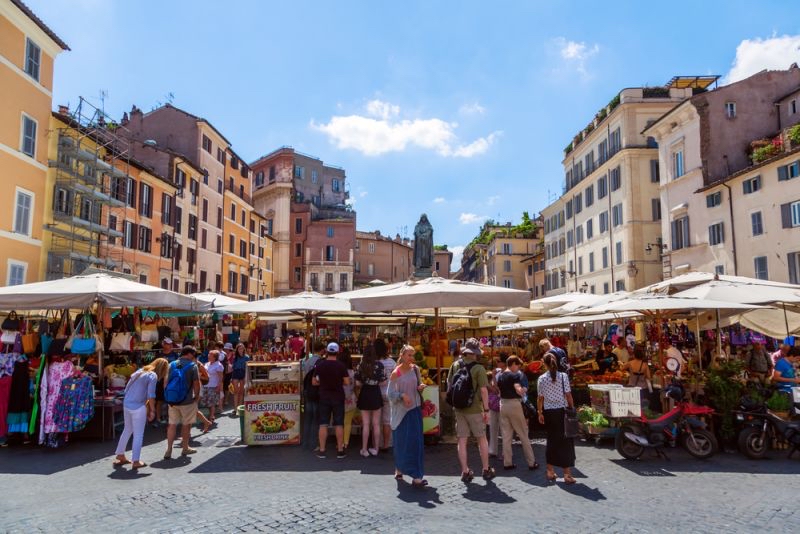 It’s near Pompey’s Theatre (where the Senate was meeting when Julius Caesar was assassinated, on the Ides of March.)